Need to create a linked server to a Google Cloud SQL instance? I did. Here's how I did it.

On the server you intend to establish the linked server from you need to install the following software in the order listed.

What you need to do.

Obviously you need to install the Java 6 JDK before you do anything. So do that.

Next, extract the Google Cloud SQL tools to a permanent directory (no bullshit temp directories or anything). For the purposes of this document I am going to assume that you placed the tools in a directory called 'C:\google_cloud_sql\'.

Now you need to create/alter some system level environment variables. 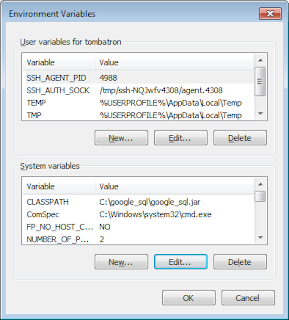 Now you need to verify that your 'PATH' environment variable is correctly setup. I had to add the following directory to my 'PATH' variable:

Having the above directory in your 'PATH' will avoid errors like 'jvm.dll cannot be found'.

Next we setup the bridge to the Google Cloud SQL JDBC.

I'm assuming at this point that you've already installed the bridge software from OpenLink. So now we are going to setup an ODBC... 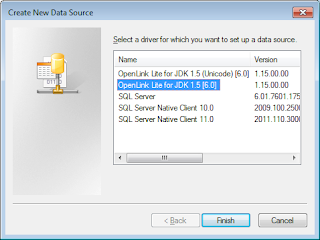 Give a name to the datasource you are creating. 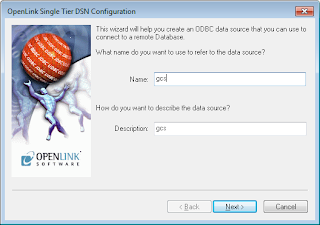 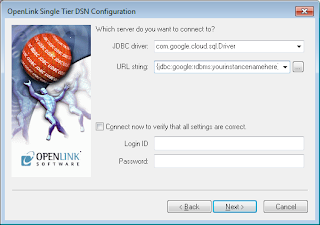 The JDBC driver is: com.google.cloud.sql.Driver
The URL string is: {jdbc:google:rdbms:put-in-you-cloud-sql-instance-name}

Click 'Next' on the wizard until the last step of the wizard. You should have the opportunity to test the connection. Go ahead and test to ensure that we've done everything right up until this point.

After you verify that the connection has succeeded. Reboot.

Seriously, reboot. If you don't you'll most likely encounter good ol' system error 126 when you attempt to setup the linked server.

I'm assuming that you know how to get to the dialog that allows you to specify a new linked server. So once you're there you need to obviously name the linked server, specify the provider as 'Microsoft OLE DB Provider for ODBC Drivers', and then specify the product name and data source as whatever you called your bridged ODBC connection to your cloud SQL instance. 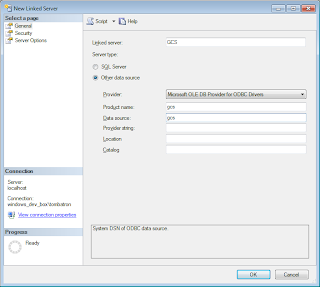 Assuming that my instructions aren't complete shit, and assuming that you followed them correctly, you should be able to click 'OK' and have a functioning linked server to your Google Cloud SQL instance.

Now that you have a handy dandy linked server, you are probably going to have a hankering to run a query against it.

Usually when you query against a linked server you use a 4 part name (linked server, database, schema owner, table name) in order to address a table. Problem is, that type of query isn't supported so we'll have to use OpenQuery.

Never used OpenQuery? Here is a quick lesson. Let us suppose that you named your linked server 'GCS'. Let us also suppose that on your Cloud SQL instance you want to query a database called 'Example' and a table called 'Plateau'.  Your query (using OpenQuery) would look like this:

Pay close attention to the fact that the name of the linked server is not enclosed in quotes, and to the fact that the query that I specified against the 'Example' database has a semi-colon at the end. Remember, that the queries that you specify inside of OpenQuery must be syntactically identical to the queries that you would normally execute against Google Cloud SQL or MySQL.

Any questions, concerns, cusses, or discusses? Put them in the comments.

P.S. If anyone knows of a free JDBC to ODBC bridge let me know. I'd like this solution to be free...
Posted by Tommy Hanks at 5:13 PM